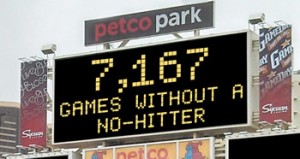 Andrew Cashner yields a 2nd-inning Juan Uribe single for the #Padres 7,167th game without a #nohitter.

Sunday night’s Padres opener was actually Game No. 3 for the Dodgers, who opened up the season in Australia by beating the Arizona Diamondbacks two straight games.