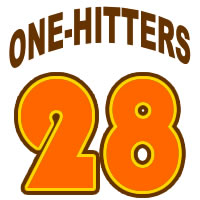 The Tigers’ only hit against Cashner came in the sixth inning, when Rajai Davis hit a single to center just past second-baseman Jedd Gyorko. The lone blemish marked the Padres’ 7,176th game without a no-hitter. Cashner struck out 11 on the night and walked two.

Cashner secured the one-hitter in the ninth inning by scorching a letter-high 95-mph fastball by a swinging Miguel Cabrera.

“Struck him out. Andrew Cashner – a one-hit shutout,” said play-by-play announcer Dick Enberg. “And a standing ovation from the 30,353 that witnessed a beauty tonight. And what a punctuation mark.”

Cashner also threw the Padres’ 27th one-hitter on Sept. 16, 2013 at PNC Park. His no-no that night broken up by Jose Tabata with a 7th-inning single to right. The Padres beat the Pittsburgh Pirates 2-0.

The OAKLAND ATHLETICS haven't fallen victim to a no-hitter since 28 years, 6 months, 10 days ago, the longest current streak.