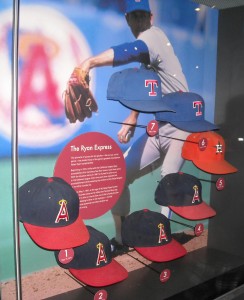 Nolan Ryan’s circle of no-no hats in the Baseball Hall of Fame.

Today’s trivia question was: What do Dick Allen, Reggie Jackson, Mike Schmidt, Nelson Liriano and Dave Bergman all have in common?

The question was borne out of Texas Rangers pitcher Yu Darvish’s loss of a no-hitter in the ninth inning Friday night for the Texas Rangers.

The five players featured in our question all broke up ninth-inning no-hitters by no-no king Nolan Ryan. Don’t feel too sorry for Ryan, though, as he ended his career with a record-setting seven no-hitters.

The first lost ninth-inning no-no came on Aug. 7, 1974, when Ryan – then a California Angel – yielded a one-out single to Dick Allen. Ryan wound up giving up three hits and taking a 2-1 loss against the Chicago White Sox. In the second lost no-no, Ryan was no-hitting the New York Yankees through 8⅓ innings on July 13, 1979, when Reggie Jackson singled. The Yankees wound up scoring an unearned run, but Ryan held on for a one-hit 6-1 victory.

Ryan’s third lost no-no in the ninth came as a member of the Houston Astros on April 27, 1988, after Ryan took a 2-0 lead into the ninth inning. The Phillies’ Greg Gross lead off the inning by reaching base on an error. After Juan Samuel struck out, Mike Schmidt hit a one-out single to kill the no-no, and Lance Parrish followed with a double that scored Gross and Schmidt’s pinch-runner, Bob Dernier. The Astros scored in the top of the 10th and inning, Dave Smith pitched a perfect bottom half of the inning for the win.

Ryan lost no-no number 4 was on April 23, 1989, courtesy of the Toronto Blue Jays’ Nelson Liriano. Liriano tagged Ryan for a one-out triple, then scored on ground out as Ryan held on for a 4-1 one-hit complete-game victory. (Side note: Five days later, Liriano stole another no-no in the ninth, this one as a pinch-hitter crushing the hopes of the California Angels’ Kirk McCaskill.)

The Detroit Tigers’ Dave Bergman is responsible for the fifth ninth-inning lost no-no, tagging Ryan for a one-out single. Bergman advanced to third on a Matt Nokes double, prompting Texas manager Bobby Valentine to bring in reliever Jeff Russell. Bergman scored on a Chet Lemon ground out and the Rangers held on to preserve a 4-1 victory, credited to Ryan.

Oddly, all of Ryan’s lost ninth-inning no-nos came with one out.

And two of them were part of Ryan’s record-tying 12 career one-hitters, a mark that matches Bob Feller’s total.

The SAN DIEGO PADRES began play 50 years, 9 months, 14 days ago and have never thrown a no-hitter. Learn more about the streak here.

The CLEVELAND INDIANS own the longest current no no-no streak among teams that have thrown a no-hitter. It has been 38 years, 8 months, 7 days ago since Len Barker tossed a perfect game agains the Toronto Blue Jays at Cleveland Stadium.