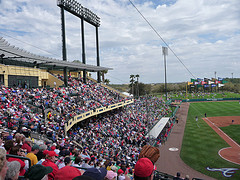 Nine Atlanta Braves pitchers combined for a no-hitter against the Houston Astros in Kissimmee, Florida on Sunday in a 10-inning game that ended in a 2-2 tie.

Of course it’s spring training so it doesn’t really count, but only one real major league no-hitter has ended in a tie, and that was back in 1884. In that Oct. 4 game, the Brooklyn Atlantics’ Sam Kimber no-hit the Toledo Blue Stockings in an American Association game at Brooklyn’s Washington Park that lasted 10 innings.

They combined to allow two earned runs on nine walks while striking out nine.

The SAN DIEGO PADRES began play 50 years, 11 months, 22 days ago and have never thrown a no-hitter. Learn more about the streak here.

The CLEVELAND INDIANS own the longest current no no-no streak among teams that have thrown a no-hitter. It has been 38 years, 10 months, 15 days ago since Len Barker tossed a perfect game agains the Toronto Blue Jays at Cleveland Stadium.

The OAKLAND ATHLETICS haven't fallen victim to a no-hitter since 28 years, 8 months, 16 days ago, the longest current streak.