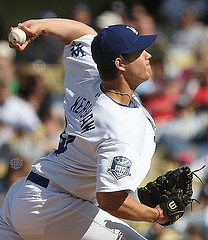 A happy birthday to the Los Angeles Dodgers’ Clayton Kershaw, who threw a no-hitter last year against the Colorado Rockies.

The only base runner in Kershaw’s June 18th gem at Dodger Stadium reached base on an error, as Kershaw struck out 15 batters. It was part of an incredible Cy Young Award season that ended with a 21-3 record and a 1.77 ERA.