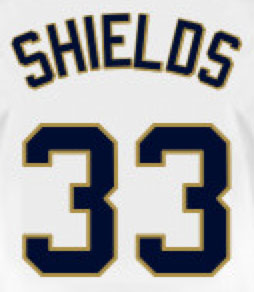 The Padres are the only team without a regular season no-hitter. The Cubs have the longest streak of games since last being no-hit, dating back to 1965. (Follow @CubsNoHitStreak on twitter.)

Shields walked two and struck out six in the outing.

José Valverde came in for the sixth, and Arismendy Alcántara tagged him for a leadoff homer, killing the potential no-no by committee.