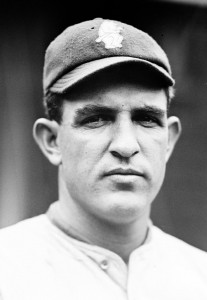 Happy birthday to the Chicago Cubs’ James “Hippo” Vaughn, who came up on the losing end of baseball’s only double nine-inning no-hitter.

Vaughn, born 127 years ago today and the Cincinnati Reds’ Fred Toney both held their opponents hitless through nine innings of baseball at Weeghman Park on Wednesday, May 2, 1917.

The game went to the 10th, and the Reds scored on a single, an error and a error on a swinging bunt. Toney got the no-no and the 1-0 victory, but Vaughn had to settle for a stellar performance that’s not recognized as a no-hitter.