The San Diego Padres are wearing their Way-back Wednesday brown and oranges, so we thought we’d update the count in the same theme.

Starter Andrew Cashner struck out the first six batters today before giving up a double in the third to the Houston Astros’ Jake Marisnick, bumping the count up to 7,351 games. 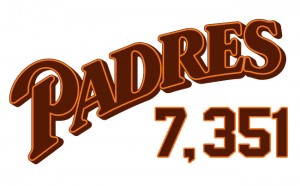