Larry McKeon pitched a rain-shortened no-hitter for the Indianapolis Hoosiers, 131 years ago today. 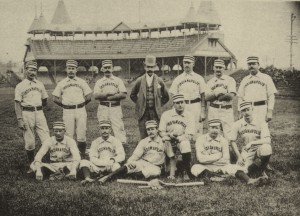 The American Association game against the Cincinnati Red Stockings ended in a 0-0 tie, called after six innings due to rain. It’s not considered an official no-no, as no-hitters of less than nine innings were purged from the list in 1991.

The May 7, 1884 Cincinnati Enquirer story about the game, headlined “A Tiresome Affair,” is a hoot. 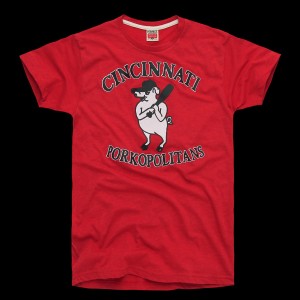 I found a web site selling this Cincinnati Porkopolitans shirt, but it’s only offered in S and XS.

But my favorite quote from the story is one that uses the Cincinnati team’s then alternate nickname – the Porkopolitans.

“McKeon’s delivery was a fifteen puzzle for the Porkopolitans, add in the six innings they failed to size it up for a single safe drive.

I have got to find a way to work a 15-puzzle reference into my upcoming book.