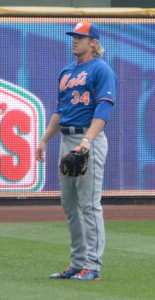 The New York Mets’ Noah Syndergaard retired the first 18 San Diego Padres he faced on Tuesday, losing his perfect game when Will Venable led off the seventh inning with a single.

The Mets rookie fireballer worked out of the seventh-inning jam to protect a 2-0 lead and ended the night throwing eight innings with no runs, three hits, no walks and nine strikeouts. The Mets won 4-0 to pull within one game of the first-place Washington Nationals in the National League East.