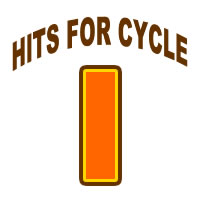 Matt Kemp became the first San Diego Padres player to hit for the cycle on Friday night, knocking one rare feat off of the team’s bucket list. The team is still seeking its first no-hitter after 7,444 games.

Kemp notched his cycle at Coors Field against the Colorado Rockies during the Padres’ 9-5 win.

He began by blasting a first-inning homer over the center field fence, then followed with a a third-inning single up the middle and a seventh-inning RBI double over the head of Rockeis center fielder Charlie Blackmon.

The Padres had been in that position before. The team said it had been one hit shy of the cycle 361 times, and on those occasions, 258 of them fell a triple short.

But Kemp completed the cycle by driving Justin Miller’s 1-0 slider deep to center. It took an odd bounce off the top of the wall, and Kemp hustled into third with a stand-up triple.

It was the 309th cycle in major league history but the first in Padres history. The feat leaves the Miami Marlins as the only team void of a cycle.

The SAN DIEGO PADRES began play 51 years, 1 month, 22 days ago and have never thrown a no-hitter. Learn more about the streak here.

The CLEVELAND INDIANS own the longest current no no-no streak among teams that have thrown a no-hitter. It has been 39 years, 0 months, 15 days ago since Len Barker tossed a perfect game agains the Toronto Blue Jays at Cleveland Stadium.