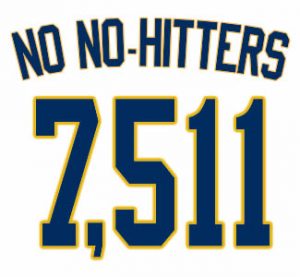 The San Diego Padres’ James Shields took a no-hitter against the San Francisco Giants into the fifth inning on Tuesday night, falling 15 outs short of tossing the first no-no in franchise history.

With nobody out in the fifth, Shields gave up a Brandon Crawford single up the middle for the Padres’ 7,511th game with no no-no. It was the longest a Friars’ thrower kept the no-no alive since April 12, when Robbie Erlin went 4 2/3 against the Phillies before yielding a Freddy Galvis fifth-inning single.

Shields was looking to become the fourth major-league pitcher to toss a no-no while wearing No. 33. The others are 33s: Lew Burdette, Mike Scott and David Wells.

The Padres are the only major-league team without a no-no after the New York Mets notched the club’s first on June 1, 2012. They Mets streak from their inception in 1962 lasted 8,019 games.

The last no-hitter against the Giants was on July 2, 2013, by the Cincinnati Reds’ Homer Bailey.