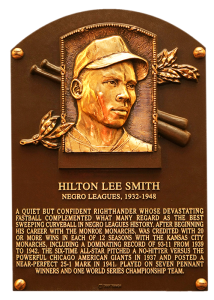 On May 16, 1937, during the first game of a Sunday doubleheader, Smith threw a no-no as a member of the Kansas City Monarchs. The right-hander from Giddings, Texas no-hit the Chicago American Giants for a 4-0 win.

According to his SABR bio written by Ralph Berger, Smith became a school teacher after baseball and also worked for the Armco Steel Company in Kansas City as a foreman until 1978.

The SAN DIEGO PADRES began play 50 years, 9 months, 14 days ago and have never thrown a no-hitter. Learn more about the streak here.

The CLEVELAND INDIANS own the longest current no no-no streak among teams that have thrown a no-hitter. It has been 38 years, 8 months, 7 days ago since Len Barker tossed a perfect game agains the Toronto Blue Jays at Cleveland Stadium.