Four balls and a bop on the beezer 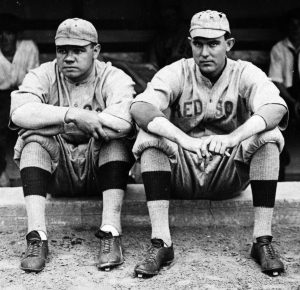 Ninety-nine years ago today, Babe Ruth and Ernie Shore combined for baseball’s first combined no-hitter. The story is featured in the first chapter of Baseball’s No-Hit Wonders, and I offer the Chapter below:

Four balls and a bop on the beezer

When baseball fans reminisce about the legend of Babe Ruth, what comes to mind first are his 60 home runs in 1927 or his gesture toward the Wrigley Field bleachers in Game 3 of the ’32 World Series before crushing a ball over the center-field fence. Not to mention his legendary drinking and noteworthy girth. But before the Babe hit his eighth homer ever in his long march toward 714, he secured himself a spot in no-hitter lore by taking a swing of a different sort—with his fist.

George Herman Ruth Jr. began his professional career in 1914 as a Boston Red Sox pitcher, and he hadn’t yet thought about becoming a slugger despite his love of the batter’s box. “There isn’t a man in the world who isn’t happiest when he’s up there at the plate with a stick in his hand, but it was pitching which took my time in Boston,” Ruth said in Babe Ruth’s Own Book of Baseball.7

The Babe had amassed an impressive 12-4 record for the Red Sox by June 23, 1917, when the lefty took the Fenway Park mound for the opening game of a Saturday doubleheader against the Washington Senators. Leadoff batter Ray Morgan stepped to the plate, and Ruth tossed his first pitch.

Three more pitches drew the same call, the Babe’s temper rising with each. Morgan took his free pass to first base as Ruth continued jawing with Owens, according to Boston Globe sportswriter Edward F. Martin.

“Get in there and pitch,” the umpire ordered.
“Open your eyes and keep them open,” Ruth yelled.
“Get in and pitch or I will run you out of there,” Owens warned.8

The Bambino threatened to punch Owens in the nose, and Owens had heard enough. The ump gave Ruth the heave-ho.
Ruth’s exact words while charging the plate were likely “I’m gonna bop you on the beezer,” said his granddaughter Linda Ruth Tosetti.9
Ruth’s right hook actually missed Owens’s beezer, glancing off the ump’s mask and landing behind the left ear.

Recalling the game in a newspaper column nearly 25 years later, the umpire had a far tamer memory of the day’s events. “Babe got hot under the collar and complained so vigorously that he was ordered off the field,” Owens wrote in the Milwaukee Journal.10 The scrum prompted several police officers, players from both benches, and Red Sox player-manager Jack Barry to drag Ruth off the field. Catcher Pinch Thomas, who tried to block Ruth from getting to Owens, also got ejected.

“Baltimore Babe with his temper beyond control went to the dugout under a cloud. His suspension will cripple the Red Sox badly as they need the big portsider very much,” the Globe’s Martin wrote, dreading Ruth’s inevitable punishment to come.11

The Sox manager, needing someone to take the mound in a hurry, turned to Ernest Grady “Ernie” Shore, a dependable right-hander who had posted a 19-8 record with a 1.64 ERA two years previously. Shore had just thrown five innings two days earlier, but he grabbed the ball in attempt to bring some calm to Fenway.

Ray Morgan, the only Washington Senators player to reach first base, walked on four pitches before being thrown out attempting to steal. Third baseman Eddie Foster stepped into the box, and Morgan took off to steal second on Shore’s first pitch. Replacement catcher Sam Agnew fired down to the bag to notch the game’s first putout.

Shore retired Foster and proceeded to send Senator after Senator back to the dugout as he filibustered his way down the Washington lineup. “Shore fanned only two and it did not seem as if he was working hard,” according to the Globe. “He made a number of nifty plays himself.”12

The only hard chance, according to the Washington Post, came in the ninth inning on a ball hit by Washington catcher John Henry, but Boston left fielder Duffy Lewis saved the no-no.

“Henry drove out what looked to be a sure hit, but Lewis came racing in and smothered the ball,” the newspaper said. “Several great infield plays aided Shore in keeping a clean slate.”13

Shore closed the game by snagging a swinging bunt off the bat of pinch hitter Mike Menosky, and the crowd of more than 16,000 fans rose to give Shore an ovation.

“Relieving Ruth after ‘Babe’s’ scrap with Umpire Owens in the first inning of this afternoon’s double-header, Ernie Shore hurled a perfect game,” declared one wire report. “Not a Senator reached first.”14 Owens called the contest one of the most exciting games he officiated. “Look through your records and you won’t find another instance of a hurler credited with a perfect performance, although facing only 26 men,” Owens said.15

The day after the game, the Brooklyn Daily Eagle wondered how American League President Ban Johnson would react to the young Ruth’s assault on Owens, who was considered an esteemed, competent arbitrator of the game. “Ban will probably announce, as he does in all cases, an indefinite suspension, but how long will Ban make it stick?” the newspaper asked.16

Johnson suspended Ruth for one week and fined him $100.17 As for Shore’s accomplishment, the official scorers of the day had a hard time classifying exactly what had occurred on June 23, 1917, according to Owens. “As I said many arguments arose at the end of the contest over this unusual situation,” the umpire said, “and finally it was decided that Ernie deserved the highest goal that any pitcher can attain—the perfect game.”18

Finally, that is, until Major League Baseball’s committee for statistical accuracy stepped into the fray in 1991. The committee chaired by Commissioner Fay Vincent established an official definition of a no-hitter, saying, “A no-hitter is a game in which a pitcher or pitchers complete a game of nine innings or more without allowing a hit.” A perfect game adds the extra requirements of no walks and no errors over nine innings or more.

The committee’s rule-tightening effort not only wiped 50 rain-shortened, darkness-shortened, and eight-inning no-hitters off the record books, it also rebranded Shore’s accomplishment—the game could not be perfect, as Ray Morgan had reached first base.

So a game that had for 74 years been considered Shore’s perfect game was suddenly classified as professional baseball’s first combined no-hitter, credited to Ruth (0 innings) and Shore (9 innings). The Babe, whose contribution to that game was only four pitched balls and a bop in the beezer, secured his spot on the no-hitters list for perpetuity.

Perhaps fortunately, Ernie Shore, who left baseball in 1920 to return to North Carolina and serve as Forsyth County’s longtime sheriff, never knew his perfect game was renamed. He died 11 years before the committee’s decision.