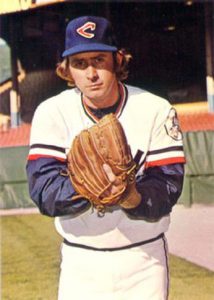 The Cleveland Indians’ Dick Bosman threw a no-hitter against the Oakland Athletics, 42 years ago today.

On Friday, July 19, 1974, at Cleveland Stadium, Bosman no-hit the A’s for a 4-0 win. He would have had a perfect game if not for his own error. With two outs in the fourth, the slow-footed Sal Bando dribbled a swinging bunt down the third base line. Bosman fielded the ball cleanly, but his throw pulled first baseman Tommy McCraw off the bag, and Bando had his base.

Bosman walked none and struck out four on the night.

The SAN DIEGO PADRES began play 50 years, 9 months, 21 days ago and have never thrown a no-hitter. Learn more about the streak here.

The CLEVELAND INDIANS own the longest current no no-no streak among teams that have thrown a no-hitter. It has been 38 years, 8 months, 14 days ago since Len Barker tossed a perfect game agains the Toronto Blue Jays at Cleveland Stadium.

The OAKLAND ATHLETICS haven't fallen victim to a no-hitter since 28 years, 6 months, 16 days ago, the longest current streak.