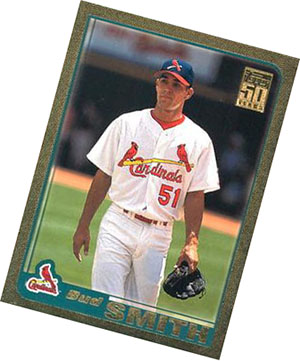 Smith, appearing in just his 13th major league game on Monday, September 3, 2001, struck out seven and walked four while holding the Padres hitless at Qualcomm Stadium en route to a 4-0 win. Smith threw 134 pitches during the game, and his Cardinals career wound up being short, and he pitched his last major league ballgame in July 2002.

Also throwing a no-hitter on this date is the Philadelphia Athletics’ Bill McCahan. At Philadelphia’s Shibe Park on Wednesday, September 3, 1947, McCahan no-hit the Washington Senators for 3-0 win.