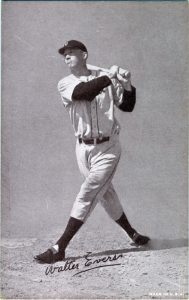 The Detroit Tigers’ Hoot Evers became the only major league player to notch two triples while hitting for the cycle, 66 years ago today.

Evers accomplished the feat on Thursday, September 7, 1950, on the road at Detroit’s Briggs Stadium, and the Indians had already built a 7-0 lead and knocked Tigers starter Art Houtteman off the mound before Evers got his first at bat. Evers immediately got the toughest part out of the way by tripling off the Indians’ Bob Feller to score Vic Wertz and cut the Indians’ lead to 7-3. That led Cleveland skipper Lou Boudreau to yank Feller after just a third of an inning in place of Jesse Flores.

Evers came up in the third inning and hit an RBI double off Flores, which again prompted Boudreau to go to the bullpen. Evers grounded out to short in the fifth before hitting a second RBI triple in the sixth, this one off of Al Benton. He then hit a two-run home run off in the eighth off Sam Zoldak before singling off Marino Pieretti to complete the cycle in the bottom of the 10th. The game was called after 10 as a 13-13 tie.

The SAN DIEGO PADRES began play 50 years, 10 months, 8 days ago and have never thrown a no-hitter. Learn more about the streak here.

The CLEVELAND INDIANS own the longest current no no-no streak among teams that have thrown a no-hitter. It has been 38 years, 9 months, 1 day ago since Len Barker tossed a perfect game agains the Toronto Blue Jays at Cleveland Stadium.

The OAKLAND ATHLETICS haven't fallen victim to a no-hitter since 28 years, 7 months, 3 days ago, the longest current streak.