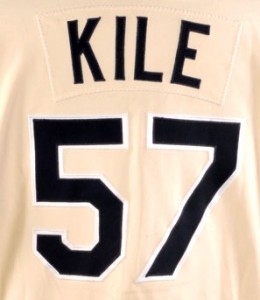 Kile struck out nine while walking one in the Wednesday, September 8, 1993, game at the Astrodome in which the Astros won 7-1. Kile retired the first 10 New York Mets batters, but the Mets got their run in the fourth thanks to a walk followed by an Astros defensive breakdown.

After walking Jeff McKnight, Kile threw a wild pitch that catcher Scott Servais thought hit Joe Orsulak on the foot. It didn’t, and as McKnight ran to third, first baseman Jeff Bagwell grabbed the ball and threw it off-line, allowing McKnight to score.

Kile, who later played for the Colorado Rockies and the St. Louis Cardinals, died tragically on June 22, 2002, of a heart attack.

The SAN DIEGO PADRES began play 50 years, 9 months, 17 days ago and have never thrown a no-hitter. Learn more about the streak here.

The CLEVELAND INDIANS own the longest current no no-no streak among teams that have thrown a no-hitter. It has been 38 years, 8 months, 10 days ago since Len Barker tossed a perfect game agains the Toronto Blue Jays at Cleveland Stadium.

The OAKLAND ATHLETICS haven't fallen victim to a no-hitter since 28 years, 6 months, 11 days ago, the longest current streak.