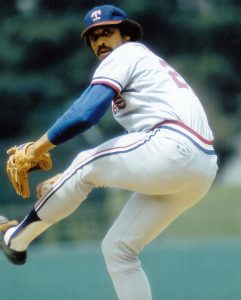 Jim Bibby, who threw the first no-hitter in Texas Rangers history, was born on this day in 1944.

On Monday, July 30, 1973, on the road at Oakland–Alameda County Coliseum, Bibby no-hit the Oakland Athletics for a 6-0 win. The 6-foot-5, 230-pound right-hander relied mostly on his fastball during the contest, struck out 13 A’s batters but walked six.

Bibby actually got his start in the New York Mets organization and was called up to the club during the 1969 pennant run, but he never appeared in a game.

The SAN DIEGO PADRES began play 50 years, 11 months, 24 days ago and have never thrown a no-hitter. Learn more about the streak here.

The CLEVELAND INDIANS own the longest current no no-no streak among teams that have thrown a no-hitter. It has been 38 years, 10 months, 18 days ago since Len Barker tossed a perfect game agains the Toronto Blue Jays at Cleveland Stadium.