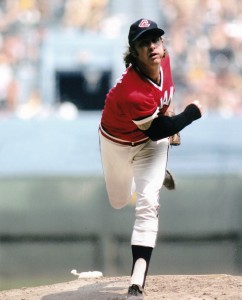 Happy 73rd birthday to Dick Bosman, who thew a no-hitter for the Cleveland Indians in 1974.

Bosman got the start against the Oakland Athletics at Cleveland Stadium on Friday, July 19, 1974, and no-hit the A’s for a 4-0 victory. The Kenosha, Wisconsin right-hander struck out four and didn’t walk a single batter, but his own error killed the perfect game.

In the fourth inning, Sal Bando hit a slow hopper to the right of the mound and Bosman’s errant throw to first let Bando take the base.