Greinke loses no-no in the 8th 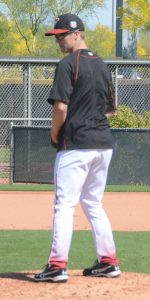 The Arizona Diamondbacks’ Zack Greinke took a no-hitter into the eighth inning on Thursday night before losing it on a Gregory Polanco homer to lead off the inning.

The lost no-no leaves us in a drought of more than a year dating back to April 21, 2016, when the Chicago Cubs’ Jake Arrieta no-hit the Cincinnati Reds.

Greinke had been facing the minimum, walking one and striking out 11 before Polanco went yard. The only runner to reach base before the homer, Jordy Mercer, was thrown out stealing in the third inning.

Greinke finished out the eighth and handed the ball to Fernando Rodney, who completed the one-hit 2-1 victory.

The SAN DIEGO PADRES began play 50 years, 11 months, 22 days ago and have never thrown a no-hitter. Learn more about the streak here.

The CLEVELAND INDIANS own the longest current no no-no streak among teams that have thrown a no-hitter. It has been 38 years, 10 months, 15 days ago since Len Barker tossed a perfect game agains the Toronto Blue Jays at Cleveland Stadium.

The OAKLAND ATHLETICS haven't fallen victim to a no-hitter since 28 years, 8 months, 16 days ago, the longest current streak.