Singer, Bunning and Eason threw no-nos on this date 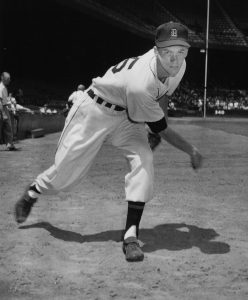 The Los Angeles Dodgers Bill Singer, the Detroit Tigers’ Jim Bunning and the Brooklyn Superbas’ Mal Eason and all threw no-hitters on this date.

Singer threw his on July 20, 1970, against the Philadelphia Phillies at Dodger Stadium for a 5-0 win.

Bunning in 1958 threw his first of two no-hitters, blanking the Boston Red Sox 3-0 during the first game of a doubleheader at Fenway Park.

The SAN DIEGO PADRES began play 50 years, 11 months, 23 days ago and have never thrown a no-hitter. Learn more about the streak here.

The CLEVELAND INDIANS own the longest current no no-no streak among teams that have thrown a no-hitter. It has been 38 years, 10 months, 17 days ago since Len Barker tossed a perfect game agains the Toronto Blue Jays at Cleveland Stadium.