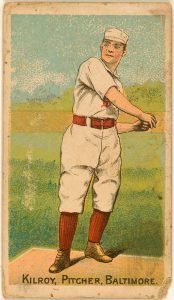 Matt Kilroy threw a 7-inning no-hitter that ended in a scoreless tie, 128 years ago today.

Kilroy, pitching for the American Association’s Baltimore Orioles, got the start at Oriole Park on Jluy 29, 1889, for the second game of a doubleheader against the St. Louis Browns.

Umpire Fred Goldsmith called the game due to darkness after 7 innings and an hour and 40 minutes of play with a 0-0 score. The contest was delayed in the third inning after police had to calm the crowd after Goldsmith ruled that Kilroy missed third base while scoring, negating an Orioles run.

The Baltimore Sun called Kilroy’s performance “the best sample of work in the box exhibited on League or Association grounds this season.”