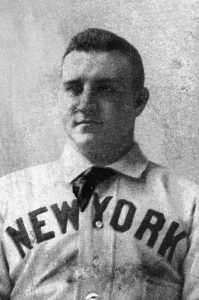 According to the New York Times, Rusie injured his hand just a week earlier and it was feared that he might miss some action, but he asked team captain Buck Ewing to get the start against Brooklyn. Rusie did walk seven batters, but the Times said that 16 batters were retired on grounders “of a very weak character.”

Also throwing a no-hitter on this date in 1888 is the Philadelphia Athletics’ Gus Weyhing, who no-hit the Kansas City Cowboys for a 4-0 win at Philly’s Jefferson Street Grounds.