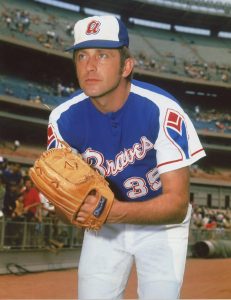 Sticking with his trademark knuckler from the seventh inning on, Niekro no-hit the San Diego Padres for a 9-0 win at Atlanta-Fulton County Stadium on Sunday, August 5, 1973. Niekro had been mixing in fastballs and sliders in the earlier innings.

Five Padres reached base during the game, three on walks and two on errors.