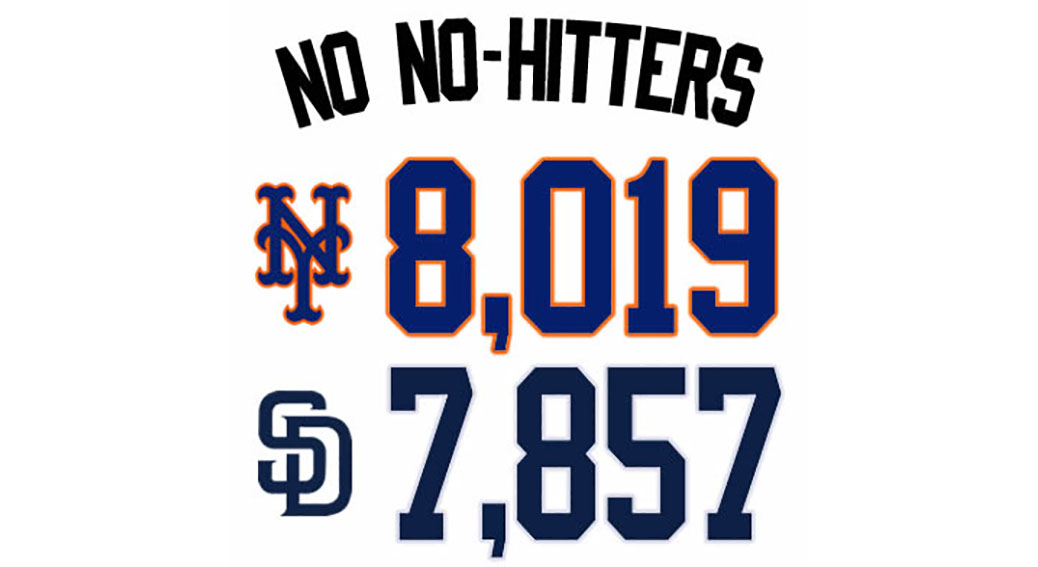 The San Diego Padres are now just one full baseball season away from matching the New York Mets’ mark of no-hit futility.

When the Colorado Rockies’ Nolan Arenado singled in the first inning off Joey Lucchesi on Monday night, the Padres hit 7,857 regular-season games without a no-hitter, which is exactly 162 games shy of the Mets’ mark of 8,019 games, halted in 2012.

On June 1, 2012, in the Mets’ 8,020th regular-season game, Johan Santana ended a 50+ season drought by throwing the franchise’s first=ever no-hitter, passing the torch to the San Diego Padres as the only major league team with no no-hitter. That same night, nearly 2,800 to the west at Petco Park, Clayton Richard gave up a second-inning single to the Arizona Diamondbacks’ Paul Goldshmidt to extend the Padres’ streak to 6,896 games with no no-hitter, and it has been climbing ever since.

Unless a Padres pitcher (or pitchers) can toss a nine-inning complete-game no-hitter before this time next year, the squad will surpass the Mets’ record.

The Padres joined the majors in 1969 alongside three other teams, the Montreal Expos, the Kansas City Royals and the Seattle Pilots. Here’s when those clubs exited the no no-no club:

The Montreal Expos franchise, which moved to Washington, D.C., to become the Nationals in 2005, wasted no time in exiting the no no-no club. In the team’s ninth game on April 17, 1969, reliever-turned-starter Bill Stoneman struck out eight and walked five but gave up no-hits during the Expos’ 8-0 win over the Philadelphia Phillies. Stoneman would get one more no-no in 1972 and Expos pitchers would throw two more before the move to D.C. Jordan Zimmermann threw the Nationals’ first no-no in 2014, and Max Scherzer has since added two.

In his 10th Major League start, Kansas City Royals starter Steve Busby walked five but no-hit the Detroit Tigers for a 3-0 victory on April 27, 1973, in the Royals’ 659th regular-season game. Busby would throw another no-hitter on June 19, 1974, becoming the first pitcher to ever throw two no-nos in his first two full seasons (he had thrown a couple late-season games in 1972). Other Royals pitchers would throw two more no-hitters to give the franchise a total of four.

The Pilots lasted just one season in Seattle, and the team couldn’t notch a no-hitter or even a one-hitter during those 163 games (they did get three two-hitters). After the squad moved to Milwaukee and was renamed the Brewers, the franchise would have to wait 17 years for its first no-hitter. Juan Nieves became the first Puerto Rico native to throw a no-no on April 15, 1987, in the franchise’s 2,863rd regular-season game, as the Brewers topped the Baltimore Orioles 7-0. Robin Yount made a game-ending diving catch to preserve Nieves’ gem, which remains the Brewers’ only no-no.

The next milestone would be the Philadelphia Phillies’ drought of 8,945 games, which lasted for 58 years, 1 month, 18 days between 1906 and 1964. The streak, though not a beginning-of-franchise mark, began on May 3, 1906, one game after Phillies’ southpaw Johnny Lush threw a 6-0 no-hitter against the Brooklyn Superbas. It ended on June 21, 1964, when Jim Bunning threw a 6-0 perfect game against the Mets during a Father’s Day doubleheader at Shea Stadium.