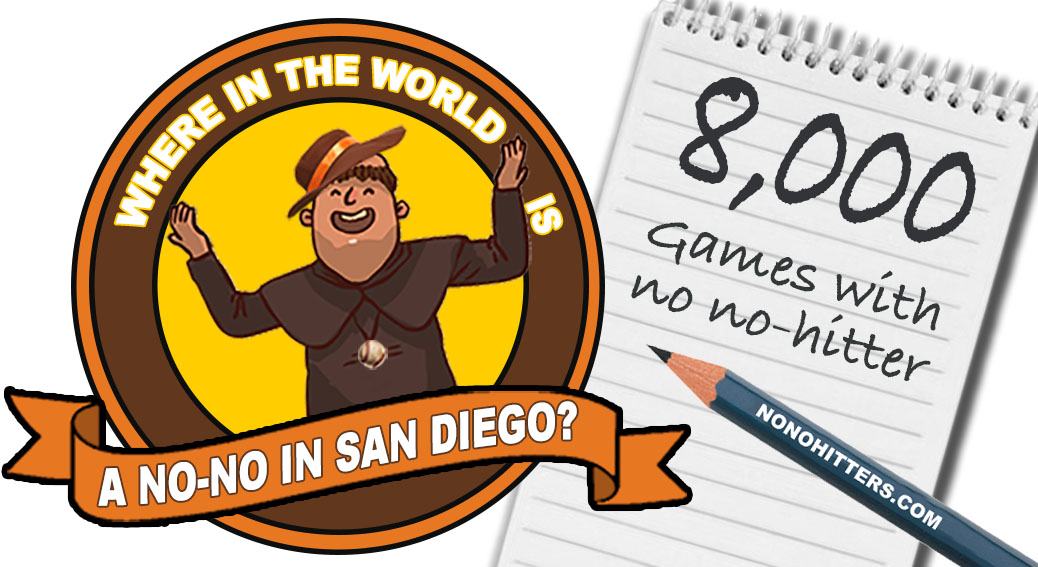 The San Diego Padres’ no no-hitters streak has reached 8,000 games, putting the franchise just 19 games shy of overtaking the Mets futility mark of 8,019.

Nick Margevicius gave up a second-inning single to the Seattle Mariners’ Dee Gordon to advance the count. Barring a no-no or rain out, the Padres would tie the Mets in Los Angeles on May 15 and surpass the mark on May 16 at Petco against the Pittsburgh Pirates.

The Mets’ no no-no count reached 8,000 games on May 11, 2012, when the Miami Marlins’ José Reyes led off the game with a triple off Johan Santana. Twenty-one days later, Santana no-hit the St. Louis Cardinals to end the Mets’ streak.

Here are all the Padres’ no no-no milestones:

April 8, 1969, San Diego Stadium (San Diego)
Dick Selma, a former New York Met selected by the Padres in the expansion draft, took the ball for the Padres’ franchise opener at San Diego Stadium but lost his no-hitter on the first batter when the Houston Astros’ Jesus Alou singled to right. Earlier that day, the Mets’ no no-hitters count reached 1,137 when Bob Bailey of the Montreal Expos tagged Tom Seaver for a first-inning RBI double.

Selma wound up pitching just four games for the Padres before he was traded to the Chicago Cubs on April 25 of that year for Joe Niekro, Gary Ross and Frankie Libran.

May 31, 1969, Parc Jarry (Montreal)
Joe Niekro, who became a knuckelballer later in his career, mostly threw fastballs and sliders when he was a Padre. On this day in Montreal against the Padres’ NL expansion partner, Niekro lost his no-no on the second batter when Manny Mota singled for the Padres’ 50th game without a no-hitter. San Diego would win the game 6-2.

The next year, as a Tiger, Niekro would take a no-hitter into the ninth against the New York Yankees but lose it on a Horace Clarke single. He never accomplished the rare feat, although his knuckleball brother Phil Niekro did in 1973.

July 25, 1969, Forbes Field (Pittsburgh)
Niekro also started the Padres’ 100th game, and he got the same result as the 50th when Carl Taylor, the Pirates’ second batter, singled. The Padres would win this game 3-2.

As mentioned above, Joe Niekro never got a no-hitter but brother Phil Niekro did. The pair lost the chance to become the first sibling no-no team, a feat accomplished by Bob and Ken Forsch in 1979.

April 30, 1972 (Game 1), San Diego Stadium (San Diego)
Not only would Padres starter Bill Greif lose the no-hitter on the lead-off batter in the Padres’ 500th game, but he would have to be lifted in the second inning after yielding six hits in what would be a 6-1 loss to the Philadelphia Phillies. The culprit was shortstop Larry Bowa, who tagged Greif for a single.

Greif would go on to throw three two-hit complete games in his 1973 season with the Padres.

May 20, 1975, San Diego Stadium (San Diego)
St. Louis lead-off hitter Lou Brock began the Padres’ 1,000th game by tagging starter Alan Foster for a triple, in what would be a 4-hit, 2-run first-inning for the Cardinals. But Foster settled down and scattered just three more hits over the next eight innings to lead San Diego to a 5-2 victory. It was one of 21 complete game victories for Foster over his 10-year career. (He also had two complete game losses.)

August 19, 1981, Busch Stadium (St. Louis)
Juan Eichelberger, who would throw one of San Diego’s one-hitters in 1982, got the ball for Padres game No. 2,000 but lost the no-no in the first inning. St. Louis Cardinals first-baseman Keith Hernandez, the third batter, tagged Eichelberger for a single in a tough start that left him giving up four runs in 2 2/3 innings of work. The Cardinals would win 7-6.

August 28, 1984, Veterans Stadium (Philadelphia)
Andy Hawkins, who six years later would throw an unofficial 8-inning no-hitter for the New York Yankees resulting in a 4-0 loss, got the start in this contest. The Padres gave him a 3-0 lead in the top of the first and Hawkins retired the Philadelphia Phillies 1-2-3 in the bottom half of the inning before getting into trouble in the second. He lost his no-hitter when Al Oliver led off the second with a double, then gave up seven earned runs leading to his ouster. The Phillies topped the Padres 11-8.

September 16, 1987, Jack Murphy Stadium (San Diego)
Mark Grant, who was traded to the Padres by the San Francisco Giants in July 1987, started 17 games for San Diego during the season. He was especially effective this night, carrying a no-hitter against the Atlanta Braves into the seventh inning. Unfortunately, Gerald Perry led off that inning with a single for the Padres’ 3,000th game with no no-no. Grant yielded just one more hit in a 3-0 complete-game win.

April 16, 1994, Busch Stadium (St. Louis)
Wally Whitehurst got the start in the San Diego Padres’ 4,000th regular season game, and the St. Louis Cardinals’ Gregg Jefferies ensured it would not be a no-hitter in the first inning. Whitehurst yielded seven hits in seven innings of work to earn the W in an 8-2 victory. Wally was an unlikely candidate for the Padres’ first no-no, as he previously played for the Mets and had a hits-per-nine-inning average of 9.7.

April 6, 2000, Shea Stadium (New York)
The Padres hit the 5,000 game mark in the team’s third game of the millennium, and two no no-hitter streaks continued thanks to this game. The New York Mets’ Derek Bell singled in the bottom of the second inning to make it 5,000 San Diego Padres games with no no-nos, and Eric Owens singled off Mike Hampton a half-inning earlier to advance the Mets’ no no-hitters count to 6,029 games.

May 7, 2006, Petco Park (San Diego)
Woody Williams lost the no-hitter in game No. 6,000 during his second stint with San Diego. Williams yielded an Aramis Ramirez single in the second inning to hit the mark, and the Chicago Cubs continued their streak of not being no-hit since Sept. 9, 1965. On that date, the Cubbies fell victim to Sandy Koufax’s perfect game – his Major League record fourth career no-hitter for a mark that would eventually be broken by Nolan Ryan (7 no-nos).

June 1, 2012, Petco Park (San Diego)
When Padres starter Clayton Richard gave up a second-inning single to Paul Goldshmidt in the San Diego’s 6,896th game on June 1, 2012, he probably had no idea of the significance.

Clear across the country in New York, Mets ace Johan Santana was working on no-hitting the St. Louis Cardinals for the club’s first no-no in 8,019 games of existence dating back to 1962. That left the Padres as Major League Baseball’s only team without a no-hitter.

September 29, 2012, Petco Park (San Diego)
Near the end of the same season that the Padres took sole position of no no-hitter infamy, the team reached the 7,000 game mark when Eric Stults gave up a Buster Posey single in the first inning of a game against the San Francscio Giants. The Padres wound up winning at Petco Park by a score of 8-3.

August 14, 2015, Coors Field (Denver)
The possibility of the first Padres no-hitter was zapped quickly on August 14, 2015, as the Colorado Rockies Nolan Arenado hit a first-inning homer off Padres starter Tyson Ross. But the Padres’ Matt Kemp also hit a first-inning home run, and he made club history in the team’s 7,444th game by following it up with a single, double and triple for the first ever Padres hit-for-the-cycle.

April 14, 2016, Citizens Bank Park (Philadelphia)
This game featured strong starting pitching, with both the Phillies and the Padres yielding just three hits. But the Phillies came out on top, winning this game 3-0. Padres starter Drew Pomeranz allowed the count to reach 7,500 when he gave up a Ryan Howard second-inning homer.