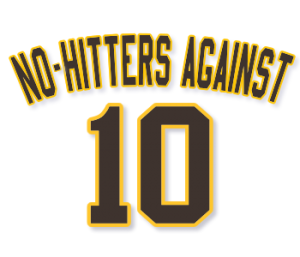 Of the hundreds of no-hitters in major professional baseball history, 10 of them have been thrown against the San Diego Padres. The San Francisco Giants’ Tim Lincecum is responsible for two of the no-nos vs. the Friars, making him just the second pitcher in history to no hit the same team twice. Pedro Martinez gets an honorable mention for throwing nine innings of perfect ball against the Padres in 1995 before yielding a hit in the 10th. Here’s the list:

Although there’s no way to prove this fact without toxicology reports from all of the other no-hitters, it is quite likely that Dock Ellis’ June 12, 1970 no-no marks the only one thrown by a pitcher who was tripping on LSD. The Pirates started thought the team had a day off and decided to drop a few tabs before realizing that Pittsburgh had a doubleheader and he was scheduled to pitch Game 1. The win apparently wasn’t pretty, as Ellis walked eight and hit at least one batter, noting he couldn’t see the batter.

Ellis, who later spent years as a substance-abuse counselor, died in 2008. A year before his death, radio producers Donnell Alexander and Neille Ilel recorded his detailed account of the day, and No Mas’ James Blagden and Chris Isenberg crafted an animated short around the original audio.

Pitchers are typically ecstatic after throwing a no-hitter. Chicago Cubs hurler Milt Pappas was more than a tad anrgy.

Pappas managed to get pinch-hitter Garry Jestadt to pop out to second to become the only pitcher in MLB history to lose a perfect game on the 27th batter but still get a no hitter.

Knuckleballer Phil Niekro on Aug. 4, 1973 threw the Braves franchise’s first no-hitter since moving from Milwaukee, and the accomplishment came at the expense of the San Diego Padres. Niekro walked three and struck out four, and the AP’s account of the game said that all of the plays behind him were routine. He went exclusively with the knuckleball in the ninth inning and finished it out by getting Cito Gaston to ground out to third.

Phil’s brother Joe Niekro, who spent part of the 1969 season with the Padres, never got a no-no but came close in 1970 as a Tiger.

Here are the final three outs of Niekro’s no-hitter:

This combined no-hitter against the San Diego Padres featured a solid six-inning start by Kent Mercker, two fine innings by Mark Wohlers and a one-inning close by Alejandro Peña that was nearly lost by third-baseman Terry Pendelton.

Pendelton cut in front of shortstop Rafael Belliard to field a Darrin Jackson chopper but decided to let the ball go by. It bounced off Belliard and the official scorer generously ruled it an E-5 (the Padres didn’t argue). Peña got Tony Gwynn to fly out and the National League’s first combined no-no was in the books. Mercker would get his own no-no in 1994 against the Los Angeles Dodgers.

Here are some highlights from the combined no-hitter:

Typically, when the batter in the ninth position makes the last out in a no-hitter, it’s a perfect game or one in which the starter faced the minimum 27 batters and caught up on outs via a double play or a caught stealing. Not this game.

A.J. Burnett faced 36 Padres batters, walked nine of them and broke Padres second-baseman Damian Jackson’s thumb by hitting him with a pitch, but held the team hitless for one of the sloppiest no-nos in modern-era Major League history. Burnett threw only 65 of 128 pitches for strikes.

The no-no marked the Marlins’ third in their brief nine-year history. It was one of two no-hitters tossed against the Padres in 2001.

Here’s the last out of Burnett’s no-no:

The Padres had barely gotten over getting no-hit by A.J. Burnett a few months earlier when a 21-year-old rookie southpaw named Bud Smith notched another against San Diego, this one in Qualcomm Stadium.

Smith was making his 11th career start and had never lasted past the seventh inning, but he stayed on the mound long enough in this contest to accomplish the rare feat by striking out seven and walking four. Smith’s career lasted just one more year, as he finished with a 7-8 record and 4.95 ERA.

Here’s the last out of Smith’s no-no:

The San Francisco Giants in 2009 hadn’t had a no-hitter in 33 years, dating back to when John “The Count” Montefusco no-hit the Atlanta Braves in 1976. (Montefusco, of course, spent the 1982 season and most of the 1983 season with the Padres.)

Jonathan Sanchez provided a new generation of Giants fans some rare feat memories on July 10, 2009, no-hitting the San Diego Padres by striking out 11 and not issuing a single walk. Sanchez had a perfect game in tact in the eighth inning but lost that quest when Chase Headley reached base on an error by third baseman Juan Uribe.

Sanchez nearly lost the no-no in the ninth, but center-fielder Aaron Rowand robbed pinch-hitter Edgar Gonzalez with a leaping catch at the fence.

To further fuel the Padres’ fire, Sanchez’s no-no was caught by Eli Whiteside, who a year later would break up the Padres’ Mat Latos’ no-no with a 6th-inning single.

Here are highlights from Sanchez’s no-no:

The San Francisco Giants’ Tim Lincecum had taken no-hitter bids into the seventh inning before, but the ninth was new no-no territory for “The Freak” on July 13, 2013.

Lincecum struck out 13 Padres hitters but needed a 148th pitch to get Yonder Alonso to fly out to left and complete the task. His no-no pitch count is just one shy of the record since Major League Baseball began tracking such things in 1988. Third-baseman Pablo Sandoval contributed to the effort with a seventh-inning backhand grab on a sharp grounder and Hunter Pence helped with a diving eighth-inning catch.

Lincecum’s no-hitter was the first at Petco Park.

Here are some highlights from the game:

As if once wasn’t enough, Lincecum no-hit the Padres less than a year after his first no-no. In this game, “The Freak” allowed just one baserunner, walking Chase Headley in the second. He retired the next 23 batters to complete a 4-0 victory.

The only other major league pitcher to throw no-hitters against the same team is the Cleveland Naps’ Addie Joss, who tossed no-nos against the Chicago White Sox on Oct. 2, 1908 and April 20, 1910.

On a night in which the San Diego Padres notched the team’s 7,847th franchise game without a no-hitter, the team set its own record, becoming the first MLB team to ever be no-hit in Mexico. A four-pitcher tandem of Los Angeles Dodgers no-hit the Friars for a 4-0 win, with starter Walker Buehler tossing six innings of no-hit ball and three relievers throwing a hitless inning each to complete the task.

Here’s a recap of the game:

Pedro Martinez is not credited with throwing a no-hitter against the San Diego Padres on June 3, 1995, even though the ball from that game is featured in the National Baseball Hall of Fame’s “No-Nos and Perfectos” exhibit.

Martinez threw nine innings of perfect ball against the Padres, but his Expos couldn’t score a run so it headed for extra innings. The Expos managed to bring a runner home in the top of the tenth, but Martinez gave up a lead-off double in the bottom half of the inning and Mel Rojas was brought in to retire the final three batters. The 1-0 victory is not considered a no-hitter.

Martinez’s near-perfect game is one of 12 performances by pitchers who threw nine innings of no-hit ball only to yield a hit in extra innings. A narrow definition of the no-hitter adopted in 1991 keeps Martinez and the others out of the exclusive no-no club.

Here’s Bip Roberts breaking up the no-no in the 10th.

regular-season games, and 34 post-season games, without a no-hitter.
The Padres' no no-hitters streak began 50 years, 10 months, 20 days ago, when the Padres played their first game, and is still going. Follow @PadresNoHitter on Twitter for the latest Padres count updates.

Next up: The Phillies

regular-season games (plus nine post-season games) is the record for longest no-hitter drought in MLB history. The Philadelphia Phillies were void of a no-hitter for 58 years, 1 month, 18 days between 1906 and 1964. The streak began on May 3, 1906, one game after Phillies’ southpaw Johnny Lush threw a 6-0 no-hitter against the Brooklyn Superbas. It ended on June 21, 1964, when Jim Bunning threw a 6-0 perfect game against the Mets during a Father’s Day doubleheader at Shea.

Our latest posts
Translate this page